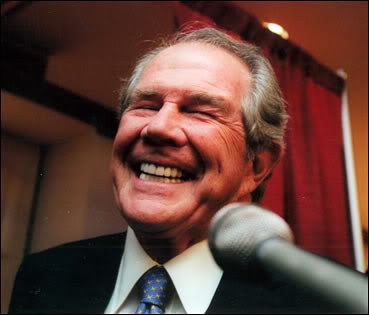 Televangelist Pat Robertson on Monday tried to deflect the blame for tornadoes away from God, saying people shouldn’t build houses in the Midwest and could prevent the deadly storms by praying.

“God doesn’t send tornadoes to hurt people,” he said. “We call them acts of God, but they’re not. All I can say is, why do you build houses in a place where tornadoes are apt to happen?”

Recently, early spring tornadoes in the Midwest and South have killed 39 people.

“If enough people were praying He would’ve intervened, you could pray,” Robertson continued. “Jesus stilled the storm, you can still storms.”

“But the hurricane for example is a release mechanism that God set in to take the heat out of this world and to transfer heat around various parts of the globe,” he added. “It’s very necessary. The fact that people want to build houses on the edge of an ocean is their fault, it’s not God’s… So don’t blame God for doing something foolish.”