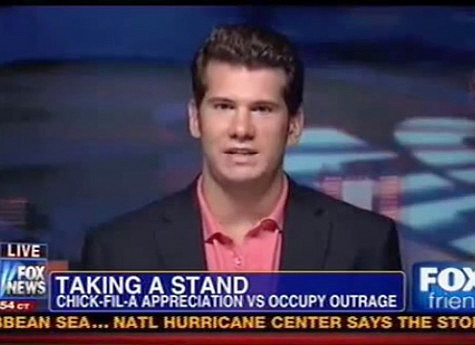 A Fox News contributor on Thursday explained that people who support Christian restaurant chain Chick-fil-A were different from Occupy Wall Street protesters because liberals “maim and rape” each other.

“Conservatives and leftists protest in different ways,” Crowder explained. “Conservatives, when they want their voices to be heard, they decide to effect real political change by making their voices heard through voting with their dollars.”

He continued: “Liberals decide to commit felonies and harass and assault and maim and rape their fellow occupiers in tents while tipping over police cars. So, there is a little bit of a contrast.”

The comedian also had some advice for Chick-fil-A critics who disagree with the company funding organizations which work to oppose marriage equality and other LGBT rights.

“You know what I would do if the owner of Pizza Hut started publicly burning Bibles?” Crowder asked. “I wouldn’t eat at Pizza Hut. … Because I’m not a Marxist idiot. I believe that people have the right to free speech.”

Watch this video from the Fox News’ Fox & Friends via Mediaite, broadcast Aug. 2, 2012.