Newt Gingrich: You Can’t Put A Gun Rack On A Volt 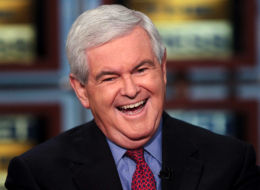 With unemployment and the economy improving, Republican presidential candidate Newt Gingrich has turned to attacking President Barack Obama on the price of gas.

At a campaign event in Suwanee, Georgia, the former House Speaker told supporters that he would bring back cheaper gas because “you can’t put a gun rack on a Volt.”

“There is no reason not to believe that we couldn’t stabilize with American production by drowning demand in supply the old-fashioned, free market way,” he explained. “There’s not reason we couldn’t have a stable price around $2 or $2.50 [per gallon].”

In an interview on Sunday, Fox News host Chris noted that if Gingrich attempted to increase oil production in the U.S., OPEC would decrease production to keep international energy prices high.

“You can’t guarantee anything,” Gingrich agreed. “But you can guarantee that under the Obama plan, there’s going to be less American production, higher prices.”