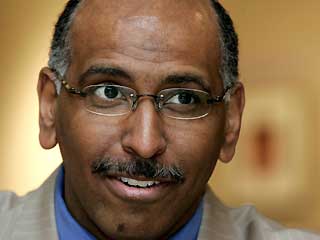 Former Republican National Committee Chairman Michael Steele is accusing Planned Parenthood of providing abortions as part of a plot to “eliminate and limit” the African-American population.

“Planned Parenthood was founded by Margaret Sanger, who sought to control the population of the undesirables and black and brown Americans were in her crosshairs,” conservative radio host Laura Ingraham told Steele on Monday. “And somehow we got into a situation — I think a lot of this is the fault of Republicans — where African-Americans are voting in lockstep with a party that supports…”

“Look at the carnage in New York City alone with black children being aborted,” Ingraham continued.

“You are absolutely right about that,” Steele replied. “And it’s one of those twists of history that I have yet to understand how when you look at something like the NAACP signing up with an organization like Planned Parenthood that has a part of its history and its charter and its existence, you know, the use of abortion to eliminate and limit the number of African-American and other minorities in this country, I — to me, it’s just beyond the pale.”

But in full context, the quote has the opposite meaning. In a 1939 letter to pro-birth control advocate Clarence J. Gamble, Sanger argued that black leaders should be involved in the effort to deliver birth control to the black community.

“We do not want word to go out that we want to exterminate the Negro population, and the minister is the man who can straighten out that idea if it ever occurs,” she wrote (PDF).

A 2011 Guttmacher Institute analysis (PDF) found that only 9 percent of abortion clinics were located in predominately black neighborhoods.